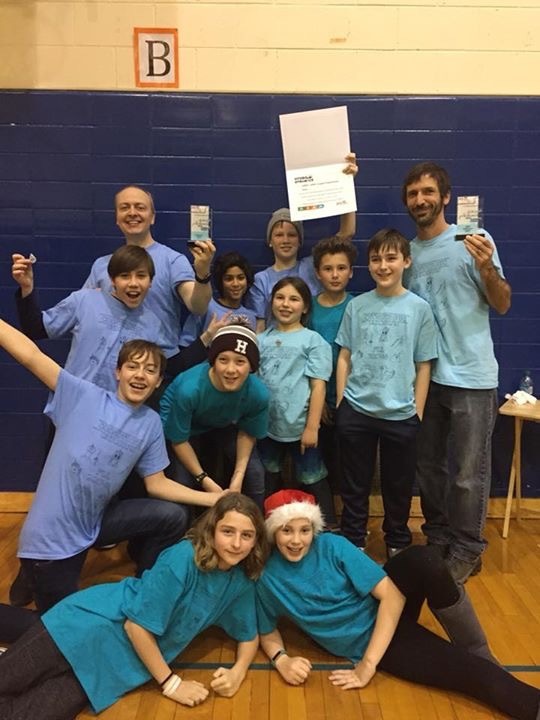 After months of preparation under the leadership of two DRW technologists, the Cosmotronic Unicorns found themselves at the bustling FIRST Lego League Illinois State Championship.

The FIRST Lego League is an international competition in which teams design, build and program a robot made of Lego blocks. Students between the ages of 9 and 16 work with coaches to build robots and try to solve real-world problems like food safety, recycling and access to clean drinking water. DRW’s Jay and Seth share what it was like to coach a team that made it all the way to the Championship, how the competition helps prepare kids for their careers, and how building a Lego robot enhanced their own work at DRW.

I’ve coached my kids in some capacity for their entire lives. But when my son retired from soccer at the ripe age of 8, I figured my coaching career was caput. Soon after we discovered the Lego Mindstorm EV3 robot, and after some research, we learned about the First Robotics Lego League. I grew up with Legos so it was an easy decision for me to take my coaching skills to the robot Lego team.

The entire competition is based on “coopertition” – a blend of cooperation and competition. With so many personalities and skillsets, this mindset, paired with strong project management foundations, kept us collaborating and innovating every step of the way. The kids were so willing and able to recognize their own weaknesses and strengths. That can be hard for adults to do, and it was refreshing to see the kids acknowledge where they fell short and lean on and learn from their teammates to ensure team success.

There are millions of ways to put a bunch of Legos together, just like there are millions of ways to build a trading system or strategy. When you add a group of 10-year-olds into the mix, you really start to think outside the box. It’s been an incredible experience for me to stretch the way I approach problem solving – something I’ve applied to my work at DRW. There’s always a new way to approach a problem, and it’s helpful to remember that sometimes getting stuck is part of that process.

Our robot was built from an existing model we found on the internet that we used as a base model in the Lego CAD program. From there we customized it with relatively simple attachments. I was really proud to see how our team consistently looked for the simplest answer to each problem. No overcomplicating or building any elaborate mechanisms. This is how I always try to approach my own development work, and it was nice to see that serve the team well in the competition.

I learned a lot throughout the season. From creativity, to project management, and working with a group of very energetic and passionate young people. We can’t wait for next year!

Jason, one of our developers at DRW, approached me about coaching a Lego programming league. My kids had been coding for a few years, and I wanted them to start using their skills in a more hands-on environment like robotics – so I didn’t need any convincing.

Our team built a robot with multiple attachments and capabilities. It used two color sensors to help navigate the game board, as well as a gyroscopic sensor to turn more precisely. It featured a lifting mechanism using Lego string, as well as arms used to drop and press levers. Our programming was more sophisticated this year, using more functions and consistent source control methods. This robot was versatile.

Lego robotics also includes a research project. This year’s theme was hydrodynamics. The team did research on water-related issues, and chose to focus on a better fertilizing solution for farms in developing countries. They came up with an idea that industry experts told us was actually viable! The team also put together and performed a skit around their findings.

Walking into the state tournament, we were overwhelmed. Extravagant displays, dozens of competition tables, 50 teams and a DJ all made the event crowded, loud, intense and fun. The event kicked off with a large opening parade, and our team was lucky enough to be chosen to sing the national anthem. There were also Lego master builders at the event, showing off their enormous creations, including two record-breaking trebuchets.

As the CIO at DRW, coaching robotics has been a good exercise in putting myself in a situation where I need to ask for help, delegate and step into the unknown. I deal with those skills all the time at work, so this was good practice to flex those skills in a new environment. It was an incredible experience for me personally and professionally, and I look forward to working our way back next year.