← Back to Insights and News
Real Estate

During the past 25 years, DRW has evolved along with the markets, expanding into real estate, cryptocurrencies, venture capital and more. These businesses came about because we saw an opportunity, did our homework, and executed a plan based on our analytical approach to trading. Here is an inside view Convexity Properties – a DRW Company.

“We saw opportunities to buy distressed properties, and so we put together a team to do that.” – Don Wilson

DRW began investing in real estate in 2009, later establishing Convexity Properties. While Convexity’s breadth is large, ranging from hotels and student housing to high end retail and mixed use destination throughout the U.S., giving value add properties a new purpose remains the focus. Here are some of our most interesting transformations to date:

This property, listed on the National Register of Historic Places, was originally built in 1914 as a home and club for women in the arts. With unique Byzantine-inspired detail on the exterior depicting the “three arts” of music, painting and drama, the building’s interior contained 110 units facing a scenic central courtyard. After 90 years of continuous use, the Three Arts Club became vacant in 2004. Multiple plans for redevelopment surfaced, including apartments and a columbarium, but a venture with Restoration Hardware and Convexity Properties was approved in 2015, and renovations started shortly thereafter. The renovations included masonry repairs on the exterior details, full rehabilitation of the historic ground floor windows, the addition of a rooftop deck, and the restoration of the central courtyard—now home to a world class restaurant.

In 2016, Convexity was awarded the 2016 Chicago Landmark Award for Preservation Excellence for their work on the Three Arts Club. In addition to the restaurant, the building is primarily a Restoration Hardware showroom open to all which, according the Chicago Tribune, “blurs the lines between retail, home and hospitality.”

The Northwest Tower, nicknamed the Coyote building, was built in 1929 and was the first Chicago skyscraper built outside the downtown area. Looking down Milwaukee Avenue, it’s easy to see how the nickname caught on as the spire and flagpole closely resemble a howling coyote. In the early 1990’s, art galleries began to pop up across the Wicker Park and Bucktown neighborhoods and an annual festival – Around the Coyote – developed at the foot of the building. Milwaukee, Damen and North Avenues all coverage to form this intersection – Damen was Robey Street up until 1927 - sometimes referred to as “Six Corners.” This area was the second to hold that title, as the Portage Park shopping district famously coined the name long before Wicker Park.

The limestone and brick building was design by architects Perkins, Chatten and Hammond and was originally designed to be professional offices for doctors and lawyers. Convexity Properties acquired the building in 2012 and partnered with Grupo Habita to rehabilitate the building and host the newest addition to the boutique hotel operator’s collection: The Robey Chicago. New features include two rooftop bars (one with a pool), a café and a lounge. 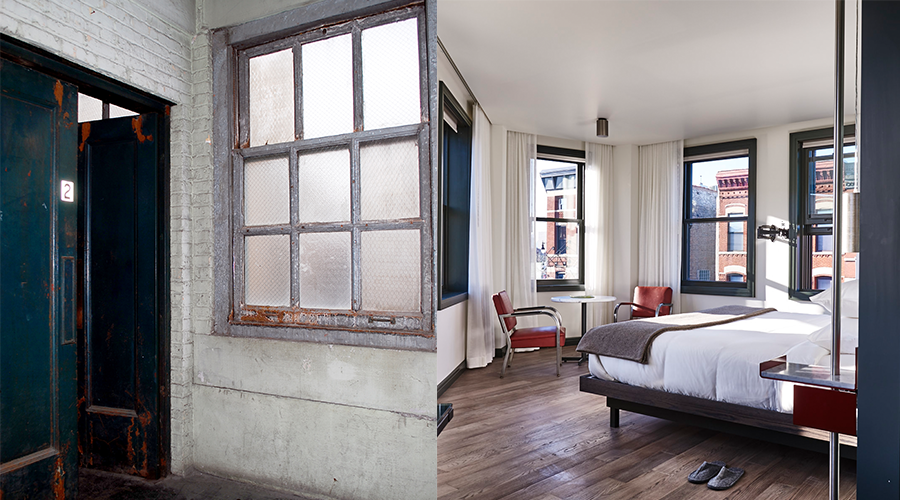 The Robey Chicago was ranked on Travel + Leisure’s 2017 IT list and one of the world’s best new hotels by Conde Nast’s Traveler magazine.

In the late 19th century, the Fulton Market district in Chicago was the center of the booming meatpacking industry. The area was built up by the nation’s “big three” meat packing firms – Philip Armour, Gustavaus Swift and Nelson Morris – and was customized with wide streets for efficient truck and train movement. Livestock trading took place in the neighborhood, a commodity still traded by DRW today. From the 1920’s to 1960’s, the district slowly transitioned from meatpacking to a grocery wholesale market.

Convexity invested in two former cold storage buildings at 832 and 833 W. Fulton Market. As with many buildings of the area, the architecture was very simple with the exception of the front façade, which was detailed with high design and brick masonry craftsmanship. After a rehabilitation and preservation of the historic façades, the two buildings are now home to Michelin star Chef Stephanie Izard’s Duck Duck Goat, the James Beard Award-winning The Publican, Gus’s World Famous Fried Chicken, The Betty and Kuma’s Corner. Beatrix and Punch Bowl Social will be opening later in 2017.